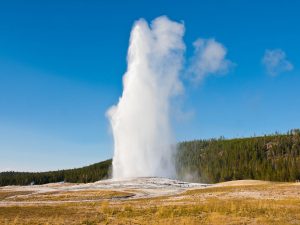 Recently I visited Yellowstone National Park.  The geological wonders are so impressive that in the 19th century no one believed them to be real.  Instead, reports of boiling water, geysers shooting 200-ft high and petrified trees were considered the fantasies of mountain men alone too long in the wilderness.

Yet, the fantasies are actually true and we can witness the predictable eruptions of Old Faithful Geyser, for example.  Water and steam build and the surface begins to churn and bubble.  Soon a plume of water and steam rise above the land, higher and higher.  Then, the geyser slowly drains its power and the plume begins to shrink until the pool is generally left still and languid despite being steaming hot.

Projects are often managed like geyser eruptions.  The drama is almost predictable as the project falls behind schedule and costs begin to exceed the budget.  Clients and senior management begin to bubble and churn.  If nothing is done to correct the problem, the deviations in schedule and budget become larger and larger until a major eruption occurs.  Then, the project is re-baselined, tempers cool, and the project proceeds as before.  That is, until the next, predictable deviation starts the cycle of churning, boiling, and eruption again.

Project controls are designed for a project manager to recognize the early warning signs of scope, schedule, cost, or quality deviations.  Early recognition of problems allows the project team to address deviations before they result in catastrophic consequences.

Traditional project management uses Earned Value Management (EVM) to monitor and control project constraints.  A similar measure is also used in Agile project manager to ensure project progress is acceptable.  Most Agile projects increase the focus on scope by introducing a product owner role in which the customer is highly integrated into team activities.

The key variables in EVM analysis are:

Schedule variance is indicated by a difference in planned value and earned value.  Hence, planned value represents the amount of work expected to be completed by a certain point in the project timeline.  Earned value, one of the more convoluted concepts, is the actual amount of work completed at that point in time.  Consider what the customer would be willing to pay for the product at that juncture as the earned value.

So, if a project is planned to be 25% complete after 16 weeks of work but is found to be only 20% complete, the 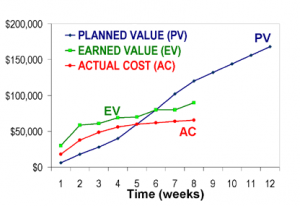 schedule variance (SV) is negative and the project is behind the plan (SV=EV-PV).  A project hat is behind schedule will lead clients, customers, and senior management to begin bubbling and churning.

Cost variance (CV) is calculated by comparing the actual cost to the earned value (EV-AC).  In other words, the project manager will monitor how much money was spent to complete the work to date regardless of whether the quantity of work meets the plan or not.  Thus, if the actual cost was just 90% of the cost to create the objectives of the earned value (work completed), then the project is running ahead of its budget.  Senior management can cool down without an eruption!

Of course, the project manager will need to troubleshoot and understand why the project has deviations.  During an initial ramp-up phase to get a project underway, small deviations in schedule and budget are anticipated.  However, once a full staff is assigned to the project, deviations from plan should be minor.  Trends indicating slippage of schedule or budget overruns must be addressed immediately.

Project eruptions can be avoided and do not need to be predictable like Old Faithful Geyser.  A skilled project manager will use EVM tools to detect early deviations in schedule and variations in cost.  Early problem detection leads to faster and less costly resolution of issues allowing a project to deliver its scope on-time and on-budget.

You can learn about EVM and project cost management in a special online course with two professional development hours (2 PDUs / 2 PDHs).  See more at www.Simple-PDH.com under the course title Project Cost Estimating.  The course includes tip sheets and a downloadable certificate for you to maintain your credentials as a Project Management Professional (PMP®), New Product Development Professional (NPDP), or Professional Engineering Manager (PEM).  Online PDHs are affordable and convenient.  It’s simple to study, learn, and earn!

In the meantime, practice using early detection of problem areas in projects.  EVM is one tool and frequent communication with team members is another.  Good luck!